A brief introduction to the main types of several composite fibers

The spinning of parallel laminated fibers is more difficult than the spinning of skin-core fibers, so the requirements for the polymer are higher.

The main factors affecting the viscosity of the melt of the two polymer materials under the conditions of the spinning process include:

(1) the relative molecular mass of the two polymer materials.

Therefore, before the spinning work of the parallel-type laminated fiber is carried out, it is necessary to do all kinds of necessary and corresponding intention work. In doing so, it also helps to analyze the possible problems.

Multilayer parallel laminated fiber is the result of parallel fiber lamination and then lamination, which is made of two polymer materials with certain compatibility alternately arranged into a multilayer structure, and laminated along the fiber axis. The two polymer materials should be selected to ensure that the spinning process is not easy to peel, but also to consider the final peelability of the manufactured fiber.

The peeled microfiber has a rectangular shape with four angles, which is suitable for wiping cloth. The fibers with rectangular cross-section have different dimensions in the length and width directions, and the ease of bending and deformation of the fibers is related to the aspect ratio of the fiber cross-section, so the fabrics obtained from different aspect ratios of fibers will produce different styles. If the width of the rectangle direction is small to a certain extent, but also due to the effect of the end of reflection similar to the colorful butterfly wings.

Orange petal type laminated fiber is composed of two polymers with different chemical structure and / or properties of a lobe type laminated fiber, its cross-section consists of similar "orange petal" shape of the lobes. For example, the polymer raw material used can be PET and PA6. There is a definite compatibility between the two to ensure proper spinning and finishing processes, but there is a difference in properties to achieve a peeling effect during the fabric treatment.

There is another adoption of EHDPET as the "rice" frame material laminated fiber, with the fiber woven into the fabric, the EHDPET with dilute alkali solution hydrolysis dissolved, the final fan-shaped microfiber fabric. The meter-shaped laminated fiber is often referred to as "8+1" type, i.e., it is composed of 8 fan shapes plus 1 meter shape. In order to make the single fiber thread density finer, can also be made into "16 +1" and other varieties. In order to ensure a good balance between the spinning process and the easy peelability of the single fiber in the finishing process, the two polymer components selected should have the appropriate compatibility.

Gear-type laminated fiber is actually a variant of the beige laminated fiber. It is also composed of two polymers with different chemical structures and/or properties and has a gear-shaped cross-section: one polymer forms the body of the gear and the other forms the gap material between the teeth.

Skin-core type fibers are made of two component layers wrapped around each other, and laminated along the fiber axially. Usually refers to the same core type, in addition to eccentric type, shaped core type and multi-layer core type. The skin-core type fiber is mostly used for self-adhesive fiber, for example, the ES fiber developed by Japan Choshu is a skin-core type fiber with low melting point PE (tm = 107℃ ) as the skin layer and high melting point PP (tm = 167℃) as the core layer. The fiber and other fibers are uniformly blended to make a nonwoven fabric, and then hot air or hot rollers are pressed together at a temperature between the melting points of PE and PP to melt the skin component, and hot melt bonding occurs between ES fibers or between ES fibers and other fibers. Since the fiber skin layer is very thin, the bonding between the fibers is delicate and the product feels soft, and the strength of the nonwoven is improved. Chen Guokang et al. reported a method of manufacturing laminated fibers with PE or its copolymer as the skin layer and PP as the core layer, claiming that the softness of the fibers can be improved.

There are also reports of skin-core type fiber manufacturing with PA6 as the skin layer and PET as the core layer. The fiber is used in the manufacture of tire cord, which can make full use of the excellent adhesion between PA6 and rubber, and can play the rigidity and high modulus of PET, thus improving the "flat spot effect" of tires. In addition, there is a skin-core type fiber with PA6 as the skin and PET as the core. When manufacturing the fiber, the appropriate increase in the proportion of PET can reduce production costs, while improving the modulus of the laminated fiber; PA6 for the skin can also improve the fiber coloring, abrasion resistance and moisture absorption properties. In recent years, some manufacturers adopt recycled PET as the core layer to produce leather core type fiber, which not only further reduces the cost of the product, and the recycling of waste materials, utilization, and environmental protection has a positive significance.

Positive skin core type laminated fiber spinning, although the requirements for spinning performance than the parallel type laminated fiber slightly lower, but the melting point of the two polymer components should not be too much difference, and the two components in the spinning process conditions of the melt viscosity should be complete may be similar, and have good compatibility, that is, the fiber can be well bonded together, not in the skin layer and core layer between the obvious boundary. Spinning eccentric laminated fiber, the requirements of the spinning performance is slightly higher, mainly requires two components in the spinning conditions of the melt viscosity is similar, in order to avoid the melt from the spinneret hole extrusion when the "bend" phenomenon. If designed to two chemical structure and / or different properties of the polymer composition of the bi-psychological laminated fiber (Figure 3-12), but also to give the fiber three-dimensional station body spiral permanent curl properties. 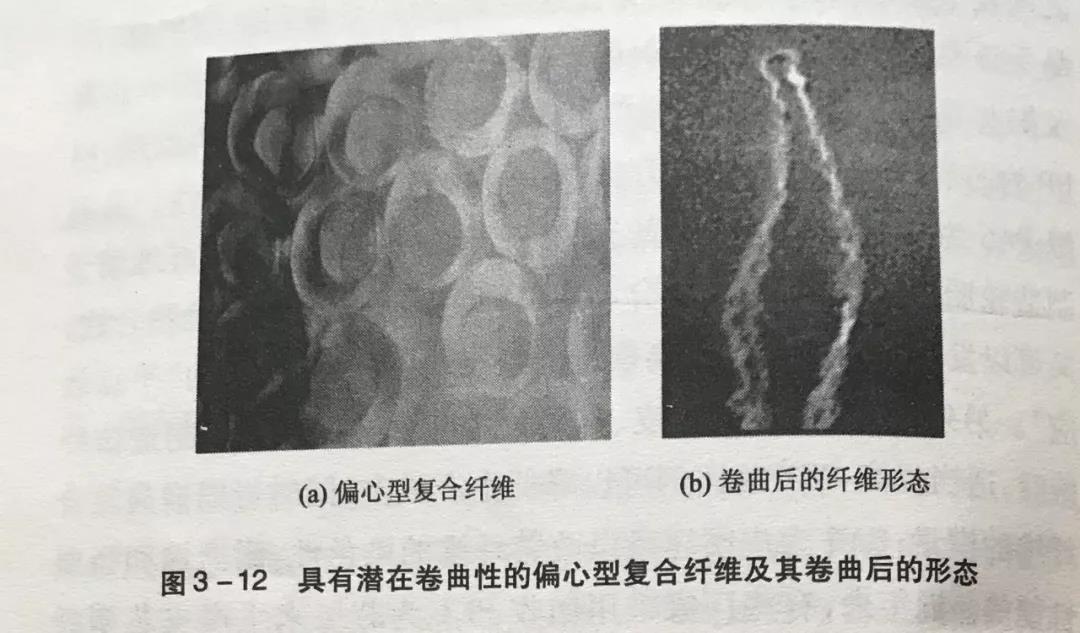 Eight, other types of laminated fibers

In addition to the above-mentioned laminating fibers, there are many kinds of extraordinary shapes, extraordinary performance of laminating fibers. For example, in the triangle fiber at the three sharp corners of the inlay easy hydrolysis of small triangle, hydrolysis will be in the three sharp corners of the formation of small grooves, so that the fiber to produce "silk" effect.

In the middle of PA6 finished fiber with circular cross-section, a polygonal polymer material with high TiO2 content is embedded as the core layer, and each sharp corner of the polygonal shape is connected to the outer edge of the fiber, resulting in a skin-core type laminated fiber with very high core shape and performance. No matter the finish line is directed at the fiber from any angle, it is only reflected and does not pass through the fiber. The knitted fabric of this fiber is very popular for making swimwear, which is white and opaque. If it is made of summer workwear, it is draped and flowing, sprinkling, showing elegant style, very suitable for women's clothing.