Film and television works on fire protection have always been loved by the audience. However, few people focus on the protective clothing worn by firefighters while the audience is attracted by the exciting disaster relief scenes. As we all know, it is the excellent flame retardancy and heat insulation performance of fire clothes that enable firefighters to successfully complete their tasks in many times. Fire retardant clothing can be said to be the behind the scenes hero of fire fighting.

Not long ago, Jilin Chemical Fiber Group Co., Ltd. developed a new high-performance flame-retardant viscose fiber, which has improved the performance of flame retardant fabrics in China to a new level.

At present, flame-retardant viscose fiber has passed the European Union REACH Regulation on Registration, Evaluation, Authorization and Restriction of Chemicals. The fabric blended with 50% viscose fiber and 50% aramid fiber has also passed the certification of EN ISO11612 standard for flame retardant protective clothing of EU.

Another advantage of flame retardant fiber is the environmental protection property of the fabric itself. "The distinctive feature of flame-retardant viscose fiber is that it uses natural plants as raw materials. Unlike ordinary chemical fiber fabrics, viscose fiber achieves flame-retardant effect while maintaining the original fiber characteristics of regenerated cellulose fiber. Waste can be naturally degraded, meeting environmental requirements, and phosphorus flame retardant meets the requirements of EU for flame retardant and halogen-free." R&D personnel said.

Generally, the flame retardant fabric coated with flame retardant often has odor, formaldehyde and other chemical substances, which will produce toxic gas after combustion, which is harmful to human health and the natural environment.

According to him, the performance and structure design of flame-retardant textile products are mostly at the level of ordinary work clothes. The designers still focus on the flame-retardant effect, without paying attention to comfort, convenience and appearance. In fact, there are few opportunities for any piece of flame retardant protective clothing to really encounter high temperature flame during its service life. However, if the flame retardant protective clothing is uncomfortable, users will choose not to wear it, which will lead to loss of protection in case of fire. The appearance of flame-retardant gel fiber has just solved the comfort problem of flame-retardant fabrics, and at the same time, it can meet consumers' higher requirements for the appearance of textiles.

As the original natural antistatic property of viscose fiber is maintained in the production process, flame retardant fiber can effectively reduce arc burns and prevent the generation of static electricity, which is more suitable for use in areas with arc or explosion-proof. According to statistics, at present, more than 80% of the fire fighting clothing linings in China, the special combat clothing of the Falcon Commando of the Chinese Armed Police, the special combat clothing of the Chinese Snow Leopard Commando, and the training clothing fabrics of the Second Artillery Force all use this fiber in large quantities. 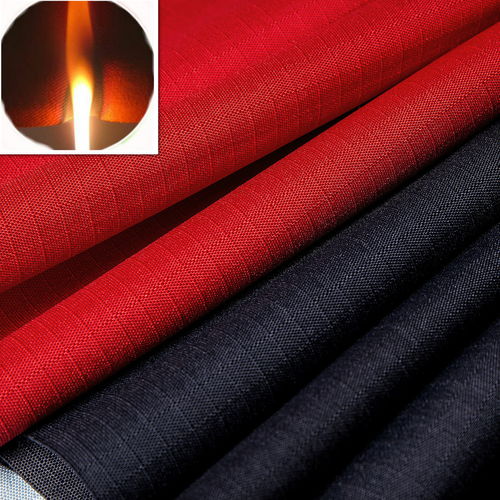 Nantong Aike Special Textile Protective Fabric Co., Ltd., like Jilin Chemical Fiber, is an enterprise that produces high-tech protective fabrics. Eco flame retardant fabrics produced by Ike are also popular in the European market. At present, it has established cooperative relations with well-known enterprises such as Delta of France and Statoil of Norway.

Why is eco flame retardant fabric so competitive? Liao Weidong, the general manager of Aike Company, made a summary: "The product has high-tech content, which is the basis for us to obtain the market; the product features of ecological and environmental protection, which meets the requirements of the current sustainable development economy; the developed countries in Europe and America have higher standards for protection products, which makes our high-tech products more competitive."

"Although the ecological flame retardant fabric is sought after by European and American merchants in the international market, it is not familiar to many people at home. How to make the product serve more Chinese people is a problem that enterprises need to face." Liao Weidong said.

Taking the consumer structure of Jilin Chemical Fiber Group as an example, state organs and state-owned enterprises account for a large proportion. These institutions pay more attention to the protection performance and health and environmental protection standards of flame retardant products, and pay more attention to the scientific and technological content of products. However, in some private enterprises or small and medium-sized enterprises, the price of products is often the main factor for them to choose flame retardant fabrics, but they do not have too many requirements for quality, and they have the mentality of 'muddling along and reaching the standard'.